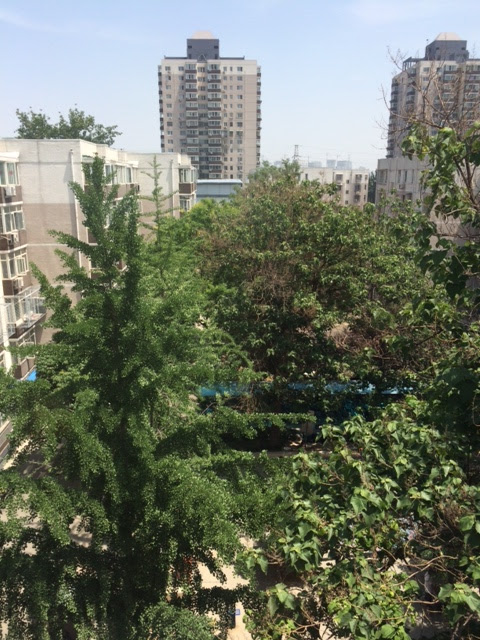 These are partial views from my apartment windows.
It's a very old place, on the top of 6 fights of cement stairs (no elevator). 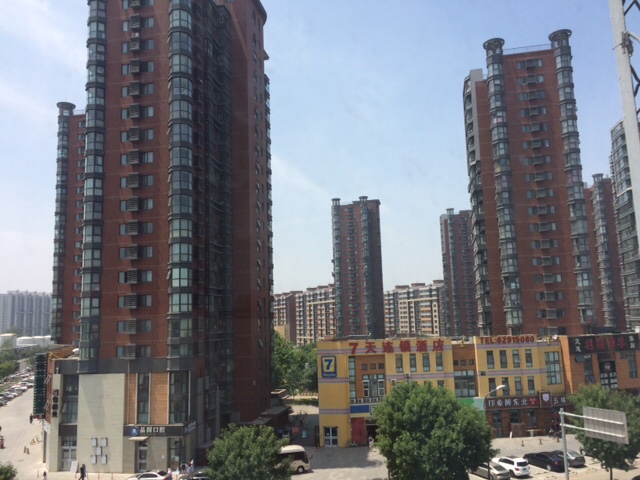 I love it! Haven't lived IN a big city since Tokyo, and the view makes climbing all those stairs and being stared at by Chinese neighbours who aren't accustomed to Westerners, worth it. 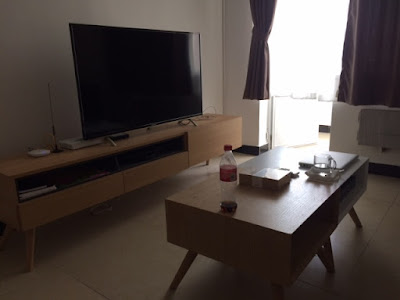 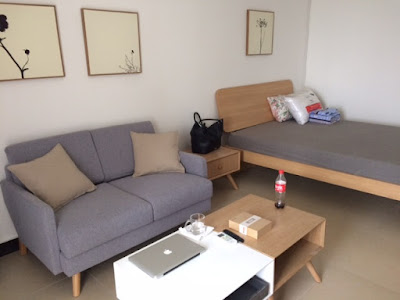 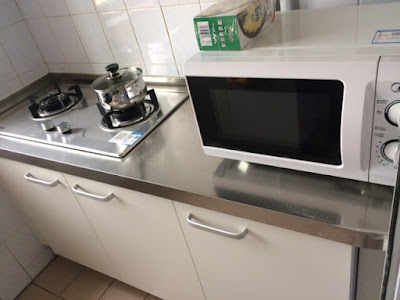 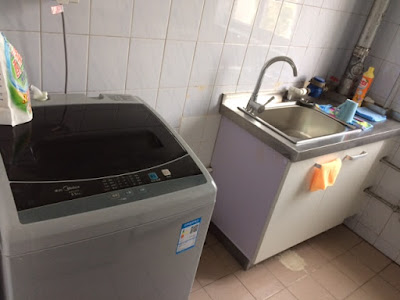 Inside, it's comfortable, but also kind of, umm, "interesting" in how the restoration of the place was done.  If you're inside and look around a bit, you'll see huge wholes filled in with plaster and uneven floor tiles, etc., but I don't look too closely.  It all works and feels charming!  It's a great place to come "home" to for a year.  I hear children singing at a near-by preschool every weekday morning, traffic pretty much all the time (which I can close the door to anytime and it becomes soft, white noise in the background), with kids and folks chatting and playing below, outside my kitchen window. 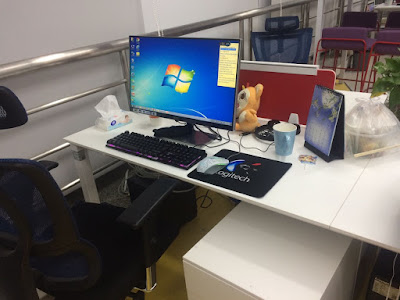 Here's where I proof read, work on power points, etc.  A lot of what I want to do is blocked by China, so that's a hurdle to overcome.  I should FINALLY be able to do the teaching demo next week! Was supposed to do during the first week.  Too sick (having left the states taking antibiotics for pneumonia) and too overwhelmed by the new tech, lesson format, etc to accomplish the task any sooner, I was given more time.  Gettin' there!
Took the photo in the evening, but, during the day
I'm surrounded by co-workers,
which is great, since there's so much I don't know! 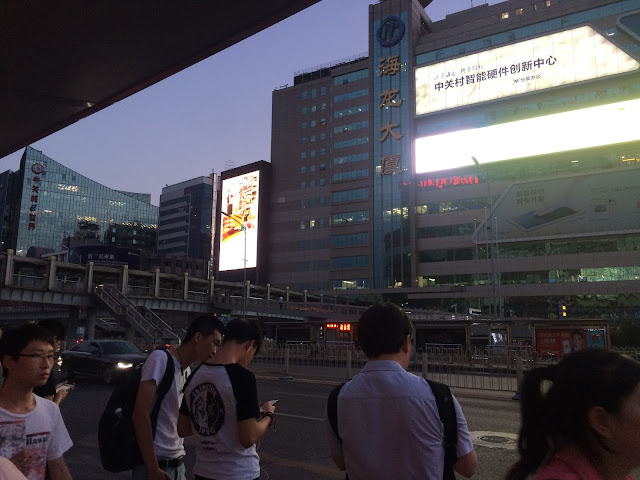 End of the day view, outside my building, while waiting for my bus.  A lot of the neon letters and images on the lighted billboards, unfortunately,
won't show up on a photograph taken with my iPhone. 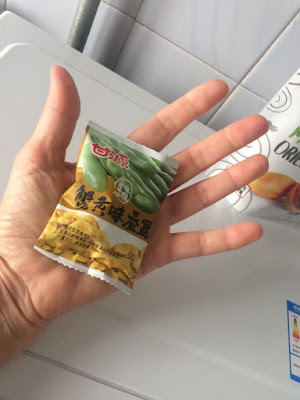 About Chinese food in reality.  Many things are mislabeled.  According to this packet of something like 12 flavored soy nuts, there are nearly 500 calories--yes, I converted Kj to calories--in these 2-3 bites.  The melon next to it (Tian Bao, I think?) is mildly sweet and 100% edible.  It's a happy new discovery!  But, what's served in most cafeterias and for dinner at our work is generally so full of sugar, msg, grease, other fillers, and what seems like fake food, I usually get sick again if I eat more than a third of what I'm served. 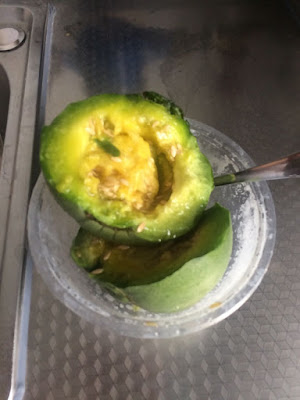 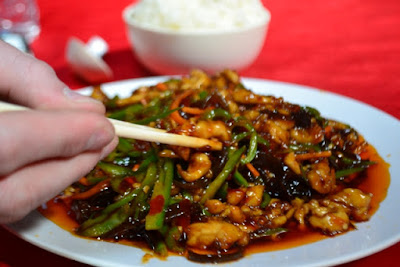 Rather than embarrass anyone by taking photos of my food, I found this image on line.  It looks a lot like something I like and eat (minus some of the unidentified stuff). But, that orange colored liquid is oil.  It sticks to your teeth, mouth, throat, and, it seems, my lungs.  I cough more at night, after eating any of these foods, than I do at the beginning of the week, when I've been careful to eat soup, honey and fruit over the weekend.  So, yes, the FOOD in Beijing is a rude surprise.  I believe that Chinese food, in its original form, IS healthier than American's tradition of meat and potatoes.  But not anymore.  I'd feel much better after a burger and salad on the side, even if it's just lettuce.
So I can get over this nasty cough and recurring fever, I decided it's time to cook in my kitchen.  Since I'm still cash poor until payday,
I go to Walmart (VERY different on the inside than an American story)
bc they accept my credit card.
These 2 boys helped me find the store yesterday. 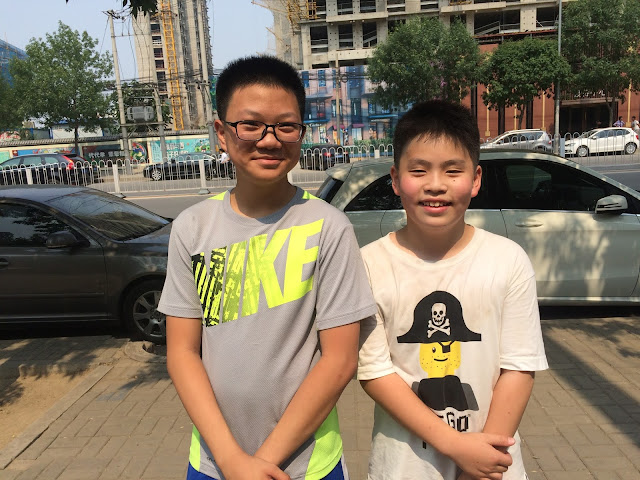 They walked a mile out of their way to help the confused American woman! The long walk started off by my trying to find a bus that goes there (tired of paying for taxis--that's another blog.  Cheap, but "iffy" drivers.  The worse they are, the more you pay).  Ended up walking, seeing something of my neighborhood, and getting lost.  I am so impressed with the youth in China!
Most people aged 30 and younger will do whatever they can to help you.
The really old would too, but sadly, I don't speak Chinese. :-(
Anyway, bought liver (I happen to love it, and it's rich in iron)
& wheat noodles (the same kind I found in Korea! I was so excited!!)
bc. they're so much richer in protein and everything else, than white rice or rice noodles. 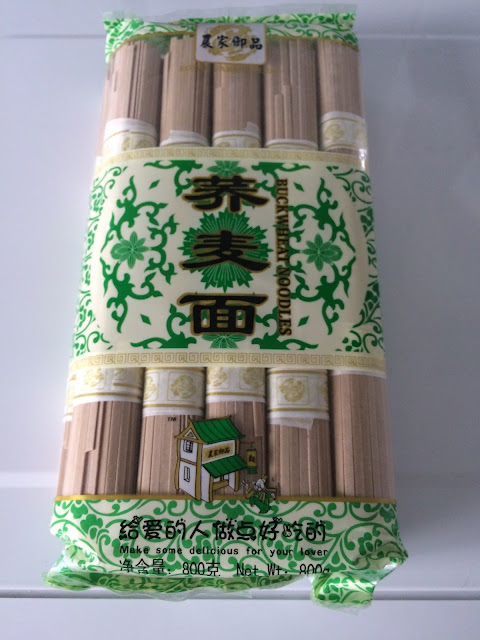 Also, purchased raw, skinless chicken with no fat, and eggs. Adding these to the ingredients I brought home of Friday (cabbage, mushrooms, onion, tofu...), was able to make a super healthy soup. It's delicious!  Besides, determined to stop feeling so lousy for over 1/2 the time! If you ever come to Beijing, throw out the idea that you're coming to the land of healthy eating.  Not right now.  There's no regulation and, unless people suddenly start dying (like the time, I hear rumors, that baby powder laced baby formula started killing babies), no accountability for whatever nutrition is or isn't included in whatever you're served.  I'm not a picky eater.
I only noticed because of the direct correlation between
feeling sicker after eating most of the foods available.
Oh, and a lot of the water's pretty lousy.  Even after boiling it 10+ minutes, it doesn't taste ok.

Guess what?  Knives aren't sold commonly.  They're considered to be weapons.
I couldn't even find a table knife to help me chop up stuff for my soup.
Instead, I found this. 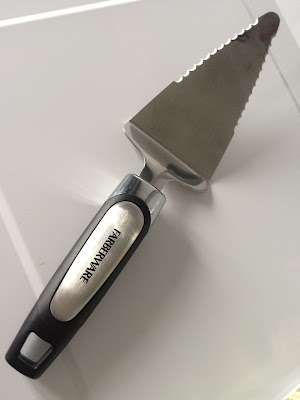 Yep, it's a pie server! I felt the edges--sharp and rough.  This'll work, I thought.  It does! Craziness.
I could easily off someone with this thing....shhhhh! I didn't say that! 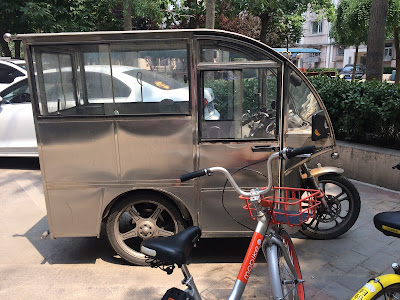 These are a few "modern" rickshaws, that can be seen everywhere, carrying everything and everyone that might fit into or on them.  You'll notice that some are pedalled manually.  Most are motorised. They all have 3 wheels.  A silver one carries people (I took this photo in the parking lot). 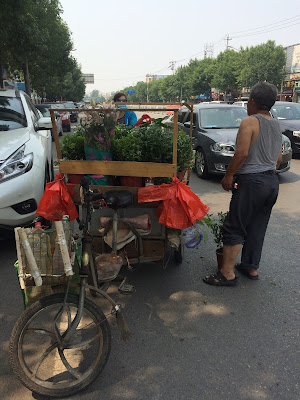 This one has plants and flowers for sale. The lady in the back buys some. 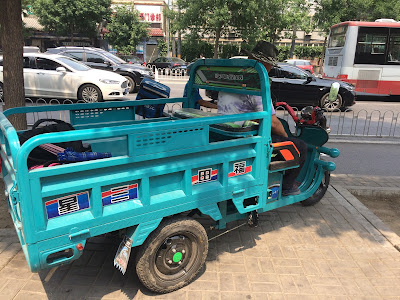 Here's a bright teal-colored tiny version of a truck/wagon.  The driver's napping. 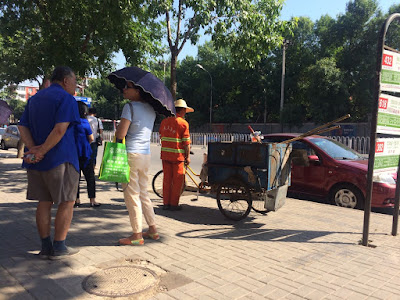 And the streets are swept up by the kind you see in this photo. I was waiting for my bus.
So cool!  I love 'em!  One of these days, I'll get up the nerve to ride in one
(when I'm sure I have cash and time to get lost, maybe) 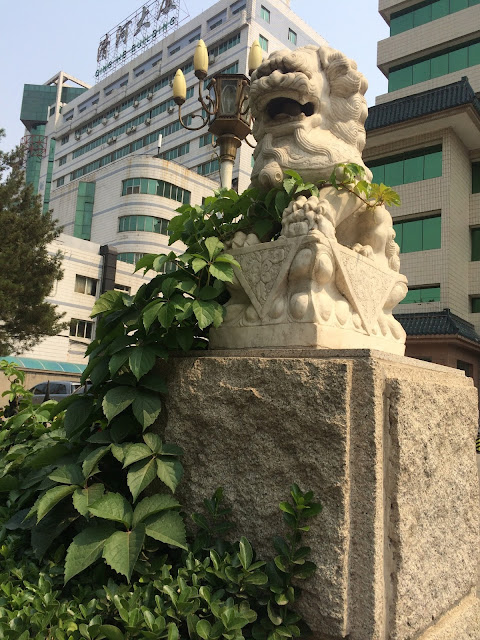 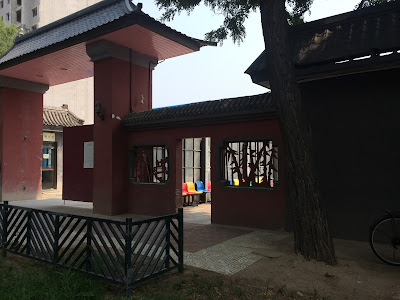 Let's end with some photos of traditional architecture tucked in here and there in a mostly modern city.  I'm delighted whenever I see little touches like this.  I don't want to be anywhere in any city.
China is where I am and what I want to see!
HAPPY FATHER'S DAY, EVERYONE!
Posted by artworkbyjoanna.com at 11:52 PM 5 comments: