Have you noticed how wonderful Fall leaves smell as they decay?
Leaves not only look lovely, they fill the air
with that wonderful Autumnal aroma we associate with the season of the harvest. 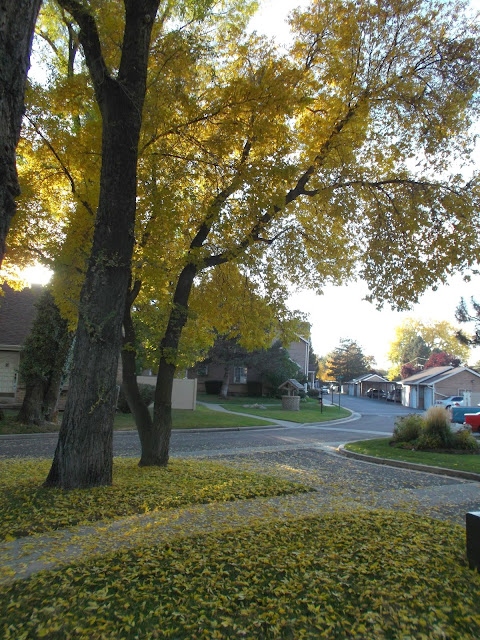 The same is true of flowers, fruits, grasses, and pretty much every type of vegetation.  Ordinary areas are transformed into glorious works of art.  We gather, frame and create crafts with them,
and the most precious perfumes are founded from crushed flowers.
Decomposing fields and forestation give off a delicious, homey and reassuring aroma as they die... 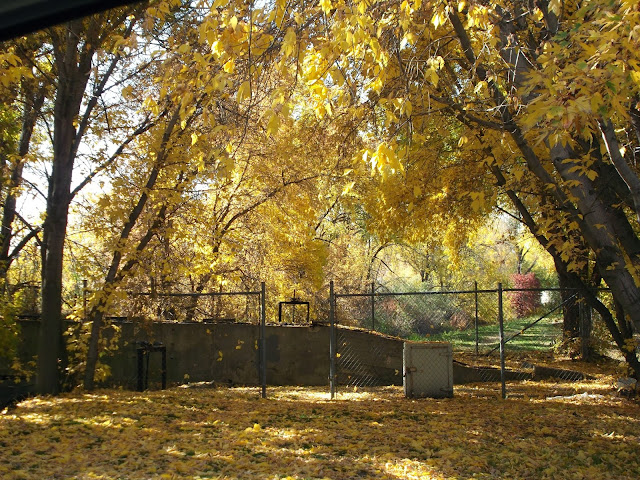 ....unlike anything that moves around of its own volition. 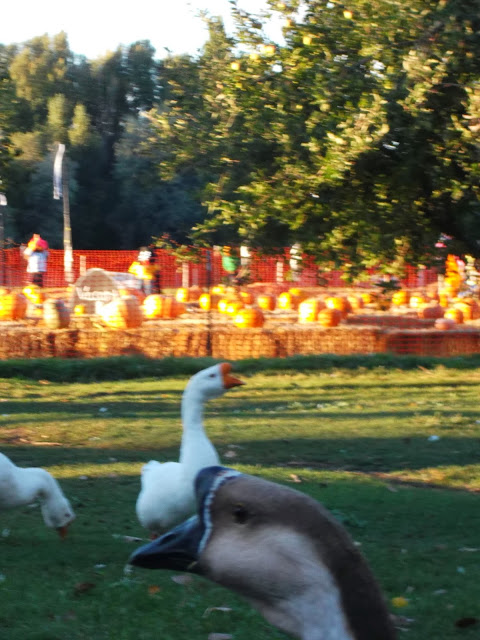 Now, while I respect vegetarians, I still love the taste of poultry.  I buy a huge turkey to roast every year, to provide turkey meals for weeks,
even months after Thanksgiving.
But, while I think it's fun to cut up and carve faces in pumpkins, 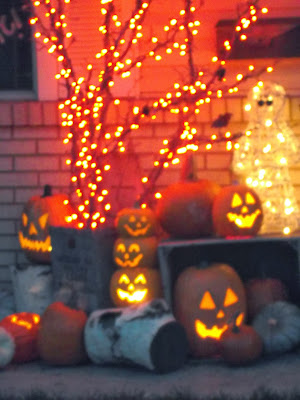 the mere idea of doing the same to a bird or beasty, no matter the breed,
belongs in the worst kind of horror flicks. 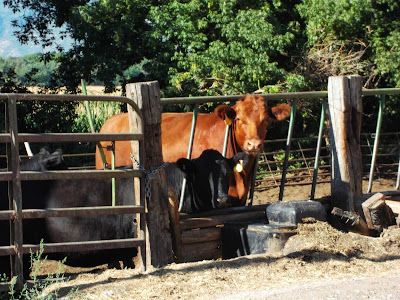 The burger I had at Joe's in Provo, was the best I've ever eaten.  And, I avoid it for the sodium and fat content, but what doesn't taste better with bacon? 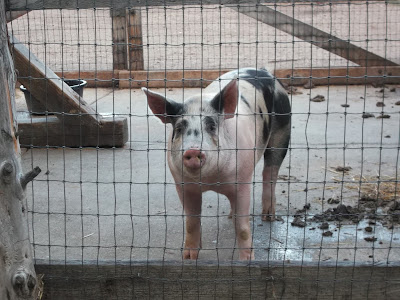 Sorry, but it's true! But...
I'm a hypocrite.  I can't bear to watch an animal--any animal--die,
much less kill it.  I don't like taxidermy and stuffed animal parts hanging on a
wall are just creepy to me.
I don't have a problem with hunters, I just have a problem with hunting.
This is a topic which leaves lots of room for argument, but,
who can argue that the odor of a dying animal is horrid
and grows more unbearable as it decays?
Even dead bugs don't emit a scent we want to hold onto. 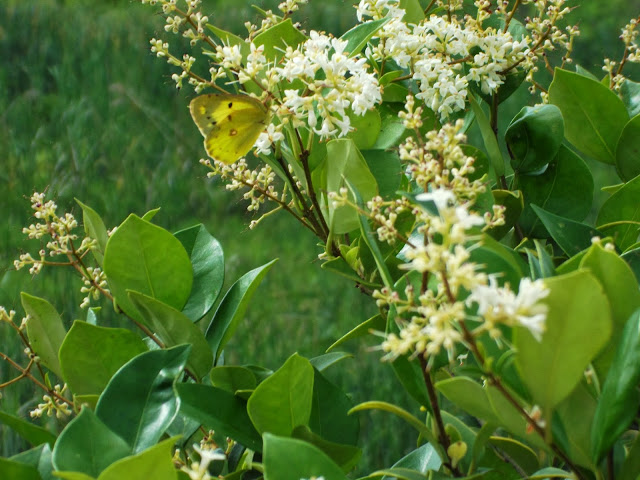 Butterflies are used in displays, but I prefer photos, not real dead ones under glass;
and the method of preserving them is rancid.  Ok, ok, what's my point?
It's simply this: there's an order to life that's self-evident in the death. 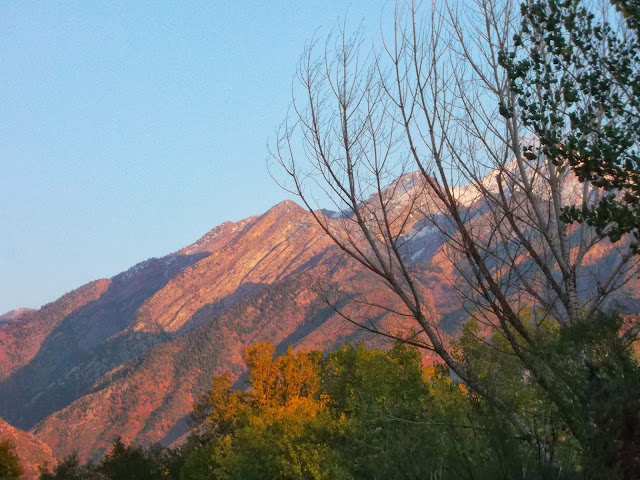 Some things are meant to die and return at a later season.  Every phase of the life journey, from tiny seed, to sapling, flowering, harvest and beyond,
each day and season is remarkably lovely and full of promise.
But, a flower, piece of fruit, or tree branch can't look back at you, produce and raise babies, or love. 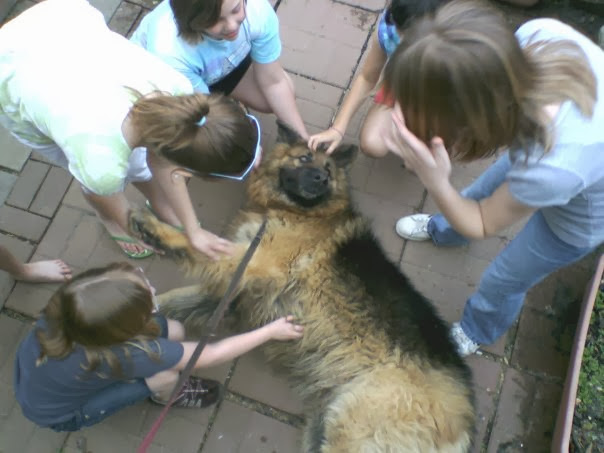 I'm sad when a favorite tree, shrub or plant dies, but I don't miss it like I miss my Gideon.
My son raised mice for a year, and we discovered that even mice, every single mouse, has a very different personality and dogs do show emotion. 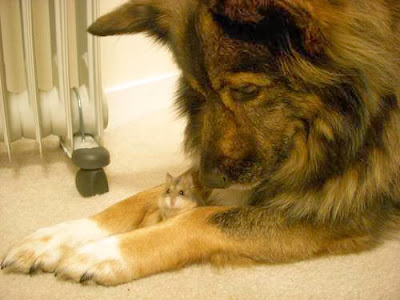 So, the heck with scientific research, and various philosophical and theological creeds,
truth's revealed in life and death.
Plants are meant to live and die, only to live again. 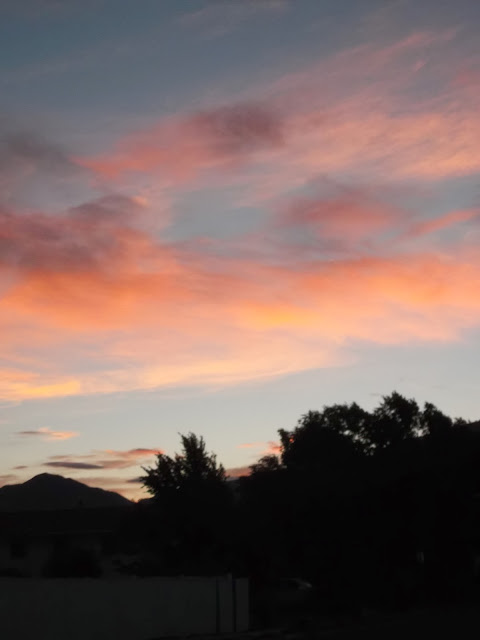 However, everything that moves of its own accord,
like the rest of us, is meant to and is going to live forever.
That's what I believe.
Posted by artworkbyjoanna.com at 2:12 PM 3 comments:

My favorite seasons fluctuate between Spring and Autumn, for obvious reasons: they're just so gorgeous!  Fall, is a season of fruition, coupled with an inherent sense of loss.  My mission in 日本 ended and my father passed away in mid-October, when the leaves are their most gorgeous. But, my son was subsequently baptized for Dad in the D.C. temple, a year later, on the same day. A dear niece, as well as a close friend's new baby share birthdays on the same day-October 11th, or 12th,
depending on whether you're in Asia or the US. 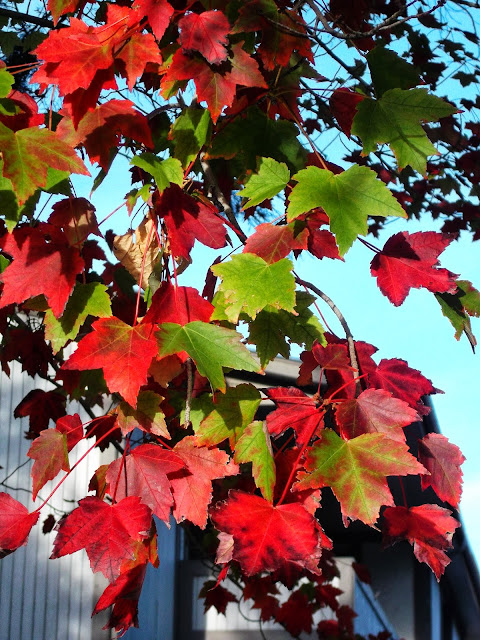 Autumn colors fade in Fall as leaves find their way to the ground.  The end of September is when the leaves look airbrushed with the most brilliant colors of the season, amidst surrounding rich greenery.
It's a season of love and loss, gathering and letting go.  Some friends, with my son and his bride gathered in my home for a dinner party with curry stuffed into a cooked pumpkin this past Sunday! 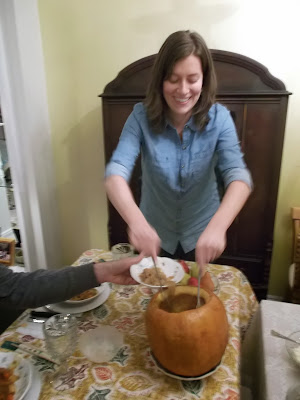 My brother captured the gorgeous image below.
Isn't it wonderful how some trees' leaves seem to unite in changing colors? 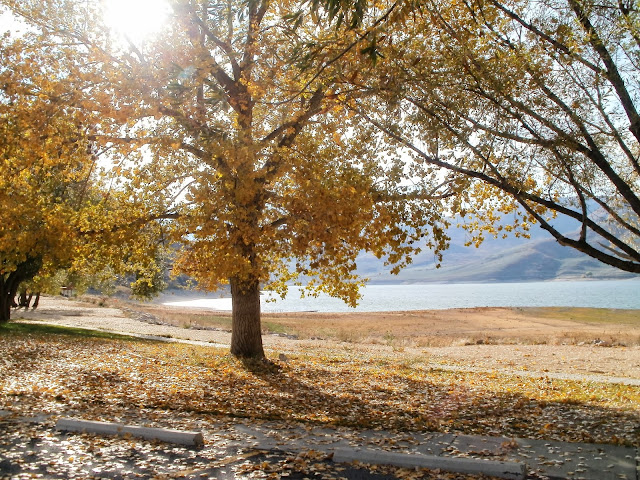 Varying shades of yellows, reds or oranges will transform the entire shrub or tree.  Jordan and Karli posed right here, before their wedding; what a gorgeous change in a few weeks! 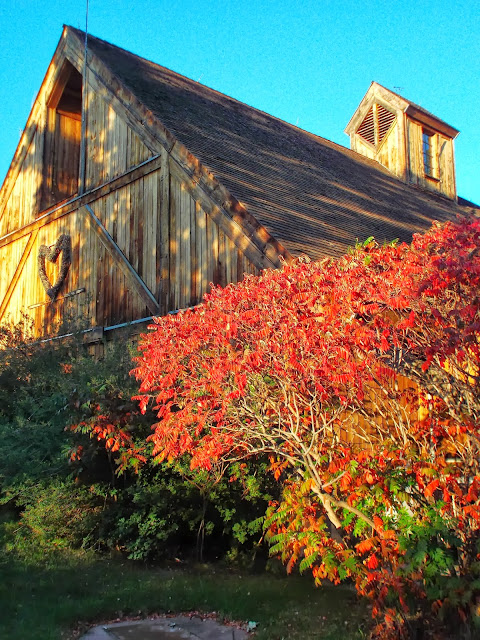 While others transform and fall singly.  Autumn really does reflect the human condition of revelation as summer greens fade to reveal exquisite beauty or merely dismal browns. 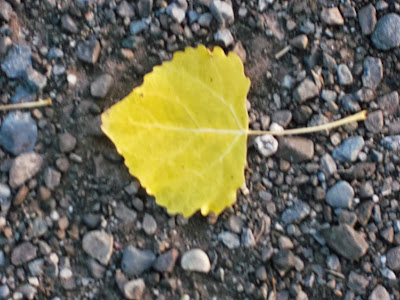 Since October 14th was a holiday, I drove up to Logan.  I am deliberating over whether or not to move there eventually, in order to reduce debt.  Because I've loved the area since I first discovered it, I bought a town home in North Logan.  The drive up was breath-taking, as snow fell over the multi-colored trees and brush, like powdered sugar over mounds of candy-sprinkled sugar cookies! 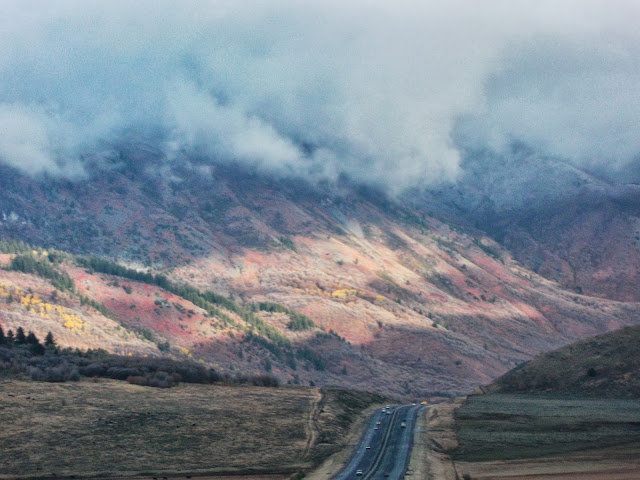 But I don't have to go far to see gorgeous Autumn colors in Utah.  The trees all through out and right in front of my Midvale home put on a brilliant display to vie with the flowers every year! 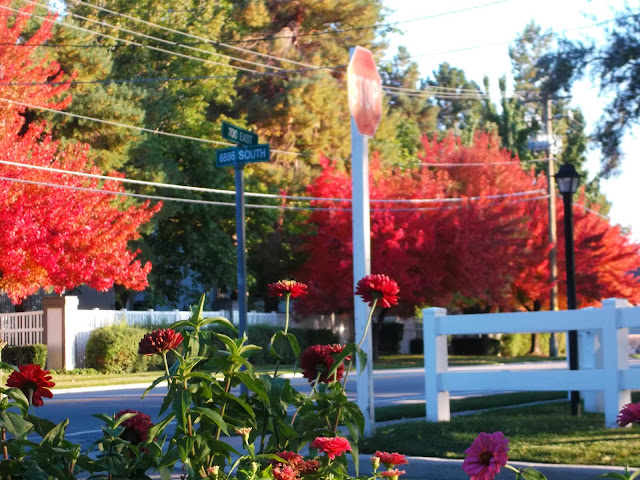 Never-the-less, the mountain passage up to and returning from Logan is glorious in Autumn!  I've never experienced it before, and had to pull over several times to try to record some of the sights. 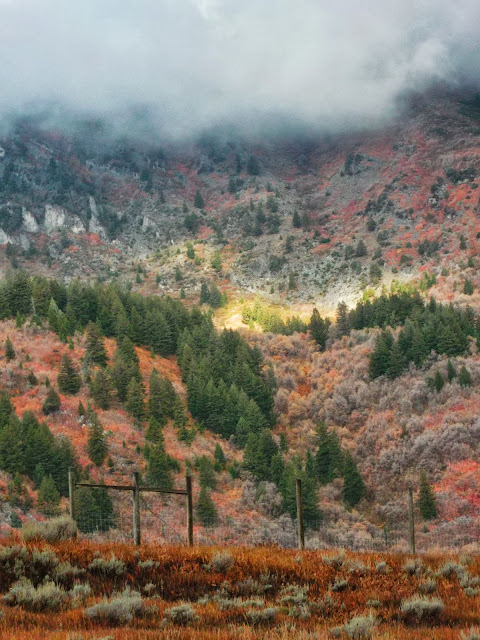 Actually, I've never really seen this season in Utah, because I was so preoccupied with college when I moved here to complete my degree.  All I saw was what was on campus at BYU, not that Provo isn't gorgeous too.  Here's another photo of Bridal Veil Falls, compliments of my brother, David again. 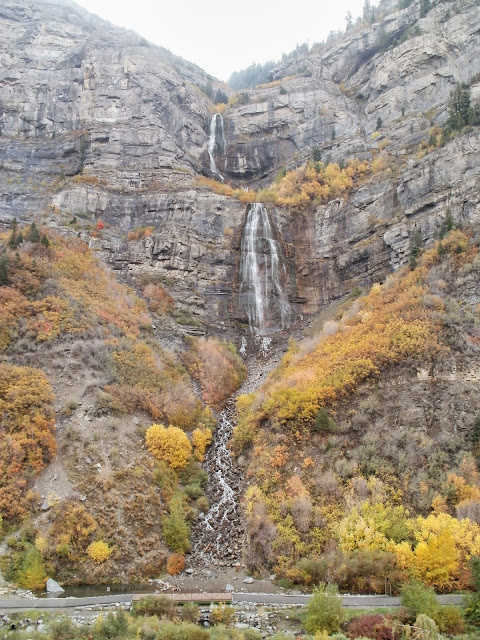 The combination of rock and Fall yellows is lovely--different from New England or Asia's Autumn displays, but equally stunning.  So, go out and take a walk, ride your bike or go jogging.
Breath deeply and enjoy this season before the chill of winter sets in!
An old friend shared this quote with me, and it's so perfect; I had to add it:
"Autumn is a second spring, when every leaf becomes a flower." -Albert Camus
Posted by artworkbyjoanna.com at 5:59 AM 2 comments: